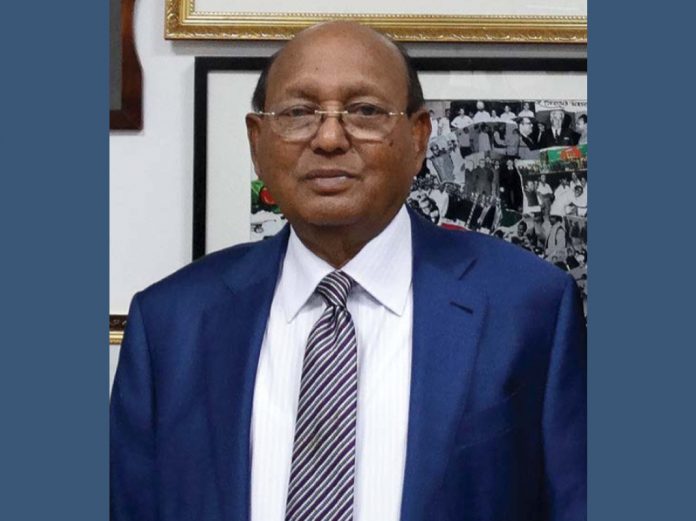 In the early 1970s, you served as political secretary to the founding father of Bangladesh, Sheikh Mujibur Rahman. In those days, US Secretary of State Henry Kissinger labelled Bangladesh as a “bottomless basket.” Did you ever imagine that the country would become what it is today?

As you rightly pointed out, I was political secretary to the Father of the Nation, and I became a minister at the age of 29. Our political movement to gain autonomy got Bangabandhu Sheikh Mujibur Rahman imprisoned for over 12 years. The ruler of Pakistan wanted to hang him but in 1969, the student community united to get him released from prison. After that, three million people lost their lives to create Bangladesh.

Bangabandhu Sheikh Mujibur Rahman imagined this country while he was in Pakistan, and he created it for the wellbeing of the people. When he assumed the role of prime minister of Bangladesh, he was empty handed. Everything had been destroyed, and everything had to be built again. Economists and political leaders didn’t have trust in our country: they said we would be the paradigm of poverty.

Today, we can say these people, including former Secretary of State Henry Kissinger, were wrong. Bangladesh has become a role model for developing economies. Our country has changed a lot in less than 50 years. Back in 1973, our exports totalled $348 million, today they exceed $38 billion. Back in 1973, we had a population of 75 million and many people were starving. Today, we are more than 160 million and we have food surplus.

Since the 1970s, our remittances have grown from almost zero to the $15-billion annual remittances sent by about 10 million Bangladeshis. Our energy production capacity has also grown tremendously from almost nothing to about 16,000MW of power generation capacity. We have gone from having no foreign currency reserves to more than $30 billion, and our budget today is over 500 times the one we had back in the 1970s.

“Our exports are already much higher than other countries of similar economic size. We expect our exports to peak at $41.5 billion in the fiscal year 2018-2019, and to reach the $60 billion mark in 2021. to achieve that objective, we have set up excellent policies
to attract investment.”

At the time of our independence, Pakistan was more developed than Asian countries such as South Korea. Today, Bangladesh outperforms Pakistan in almost every social and economic indicator. When I was a child, I had to go to school barefoot because we couldn’t afford to buy shoes. Today, Bangladeshi villages are quickly developing. All in all, we have come a long way, and I think that the best is yet to come.

The Bangladeshi government is seeking to increase its exports from $38 billion per year to $60 billion by 2021. What key drivers will allow Bangladesh to achieve this ambitious goal?

Let me start by saying that our exports are already much higher than other countries of similar economic size. We expect our exports to peak at $41.5 billion in the fiscal year 2018- 2019, and to reach the $60 billion mark in 2021. To achieve that objective, we have set up excellent policies to attract investment. These include getting rid of double taxation and guaranteeing investors 100% profit repatriation. In addition, we are working on expanding our export promotion zones, from where local and international companies currently export over $6 billion-worth of goods. We are also working on supporting the diversification of our exports.

What strategic markets and industries will allow Bangladesh to complement the extraordinary impact of the garment industry?

Presently, the ready-made garment sector employs more than 4.5 million people and accounts for over 80% of our exports. If there are no major incidents, we believe that exports can increase to $50 billion by 2021. However, right now we are placing a stronger focus on diversification of our exports. By 2021, we expect to reach the $5 billion mark in the IT industry, and the $3 billion mark in the leather industry.

Another industry with great potential is pharmaceuticals. Although we export our pharmaceutical products to 127 countries, only 3% of our production is exported. So, there is room to expand the volumes of our pharmaceutical exports. Finally, we would like to have a bigger presence in markets that are still relatively new for us, such as Brazil and Argentina.

What have been the main achievements of the administration led by Prime Minister Sheikh Hasina?

Our Father of the Nation had two dreams: the first was to become independent and the second was to turn the country into a developed economy. Our great leader Bangabandhu achieved the first one, and his daughter Prime Minister Sheikh Hasina is leading the country with great vision and determination to achieve the latter goal of becoming “Golden Bangladesh”.

Coinciding with the 50th anniversary of our independence, Sheikh Hasina set out our Vision-2021, the country’s strategic development blueprint which consists of two main pillars. One pillar seeks to turn Bangladesh into a fully digital economy.

The second pillar seeks to transform Bangladesh into a middle-income country. Bangladesh is one of the countries identified by Goldman Sachs as the “Next Eleven” emerging economies. Global financial services giant JP Morgan Chase & Co. has also identified Bangladesh as one of the “Frontier Five” economies in the world.

We are continuing to make significant progress as a country and are moving towards a digital future. We have already eradicated paper from many of our ministries and we were one of the first signatories to agree on cross-border paperless trade. If there are no major unexpected events, I estimate that we will become a developing economy by 2024 and our country will meet all the UN’s Sustainable Development Goals by 2030. Thanks to the leadership of Prime Minister Sheikh Hasina and the drive of the private sector, Bangladesh is going in the right direction, and we are on the way to fulfilling the dream of the Father of the Nation.

Empowering individuals, communities and the nation through CSR

The rise and rise of Bangladesh