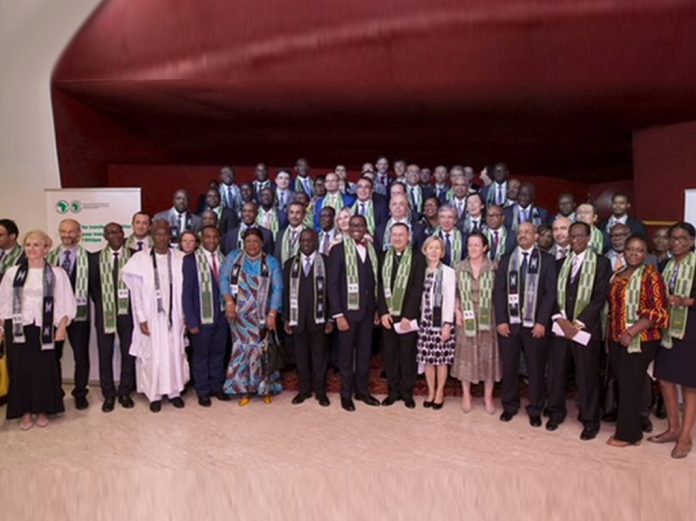 Abidjan, Côte d’Ivoire, February 7, 2018 – The President of the African Development Bank Group, Akinwumi Adesina, hosted the annual luncheon of diplomats accredited to Côte d’Ivoire in Abidjan on Tuesday with an appeal on the Bank’s member countries to contribute to the 7th General Capital Increase to enable the institution to realise its development objectives.

Welcoming the diplomats on behalf of the Board of Directors, management and staff of the Bank Group, Adesina shared perspectives on the performance of African economies, updated them on the institution’s activities and highlighted emerging economic issues for the Bank and the continent.

“The African Development Bank, your Bank, is reforming, innovating, leading and delivering more for Africa than ever before. With the strong support for a General Capital Increase by our Board of Directors, Governors of the Bank, and you, the Ambassadors representing our shareholder countries, Africa will indeed experience a much brighter and impactful future,” he said.

Adesina highlighted Africa’s performance noting that the continent remains resilient to global economic headwinds and climate shocks as related by the Bank’s 2018 Africa Economic Outlook published in Abidjan on January 17, 2018.

The President also shared important landmarks on the Bank’s ongoing reforms and achievements over the past two years:

Currently, the Bank is spearheading the development of the Desert-to-Power initiative to harness electricity from the sun all across the Sahel, designed to generate 10,000 MW of power, connect 250 million people to electricity, including providing 75 million people with off-grid systems.

A generous General Capital Increase will enable Bank to do more

The Bank is “reforming, changing, delivering and leading,” through the strong support it receives from it member countries, Adesina said, adding that such support will be most needed during the General Capital Increase to help the Bank do more for Africa.

“The support of all shareholders will be crucial for the General Capital Increase of the Bank. The Bank should do more for Africa and we are working extremely hard to revamp the Bank, and put it in a much stronger position, with more highly capable staff and institutional capacity to deliver more … better and faster. Our ability to deliver in the past and now is a good indication that you can depend on us to deliver more in the future.”

To mobilize African and global pension funds, sovereign wealth funds and institutional investors, to invest in Africa, the Bank has launched the Africa Investment Forum (AIF) to be held November 7-9 in Johannesburg, South Africa. The transactional forum is expected to become Africa’s premier investment marketplace, Adesina said, noting that several peer institutions have indicated their interest in participating in what could become Africa’s largest private-sector investment accelerator.

In his response, the Dean of the Diplomatic Corps, Apostolic Nuncio to Côte d’Ivoire, Monsignor Joseph Spitieri, congratulated Adesina on his 58th birthday and commended the Bank for helping pull people out of poverty.

“The success of your strategy encapsulated in the High 5s is testimony to your commitment to help people in Africa and reduce poverty,” the cleric said.

“We wish the Bank success in its endeavours to improve the lot of the most deprived people in Africa,” he added.

Invest Africa THE ANNUAL DEBATE 2019 event to take place in...