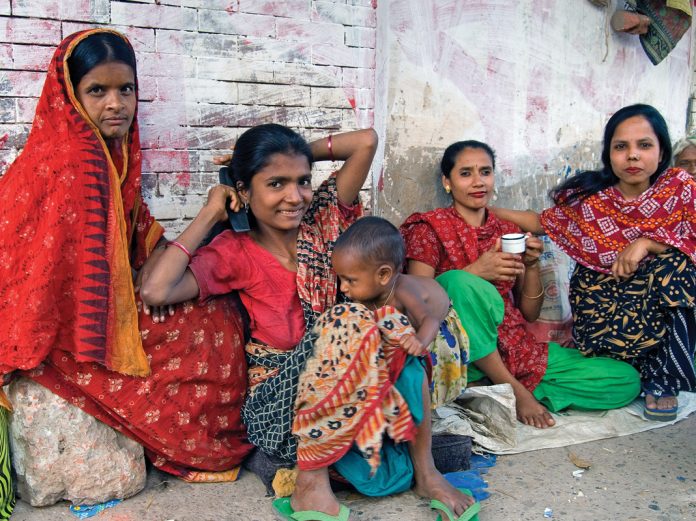 Since a tragedy called the attention of the world to working conditions in Bangladesh,  the tide began to turn in favour of more corporate social responsibility.

The Rana Plaza disaster in Dhaka, in which 1,134 garment workers died in April 2013, was one of the worst industrial catastrophes in the world and a turning point for Bangladesh’s apparel industry.  That morning, hundreds of workers were about to start their shift in the eight-story building housing garment factories, apartments, stores and a bank. Even though the day before many had reported seeing large cracks on the building, they had been told to come to work. They duly clocked in and, at around 9 a.m., the building collapsed. It took only 90 seconds for it to be reduced to a pile of rubble; it took months to establish the final balance of casualties.

There had previously been other accidents in local garment factories, but this one was something else altogether. The victims in this case were producing garments for some of the most renowned global fashion companies. Rana Plaza shone a harsh light on globalisation and the consumption society: low-paid workers from a developing country lost their lives so that Westerners could wear cheap prêt-à-porter.  Sensing that their clients in the West might turn away from their “Made in Bangladesh” garments, some 250 fashion companies signed two initiatives: the Accord on Fire and Building Safety in Bangladesh, and the less constraining Alliance for Bangladesh Worker Safety. Both were designed to improve safety in about 2,300 factories supplying Western brands, and they completed their terms this year.

What has changed in the last five years? The accord and the alliance have brought about unquestionable improvements in workers’ safety — no major incident has taken place since then — but beyond that, the tragedy opened a debate in society and in the political arena about working conditions in developing countries and the collective responsibility of multinationals and customers.

“I think right now, of the developing countries with a ready-made garment sector, Bangladesh is the safest,” Rob Wayss, executive director of the accord, told The Guardian in April 2018. In April 2018, the accord reported 222 signatory companies, 1,600 factories and 2 million workers covered, and 25,000 follow-up inspections. Furthermore, 84% of the identified safety issues have been reported or verified as fixed, 767 factories have completed over 90% of the safety remediation actions, and 142 factories have completed all safety remediation from initial inspections.

In total, the accord has seen more than $55 million invested in safety monitoring, training of health and safety committees and site inspections by 200 trained engineers. The signatories also financed safety measures such as improving structural design and installing fire doors and sprinklers.  But although the accord has improved workers’ safety, the original version had no impact on wages or on workers’ freedom of association. Furthermore, it only concerned those factories that supply international brands, about half of the total garment factories in Bangladesh. Around 60 leading fashion brands that use some 1,200 factories in Bangladesh — among them Inditex, H&M and Primark — have so far signed a new accord, valid until May 2021, which now covers training and a complaint protocol for the right to freedom of association; workers’ severance payments related to factory closures and relocations; and, more importantly, the planned transition of the accord’s functions to a national regulatory body supported by the International Labour Organisation.

Have these developments in the garment sector influenced other Bangladeshi industries? It’s difficult to say, as there are no comprehensive analyses of the extent of corporate social responsibility (CSR) in Bangladesh’s private sector. Philanthropy has deep roots in the country, in part because there is so much need for it, but also for cultural motives linked to Islam. However, some sectors, such as banking, appear as front-runners in CSR. Grameen Bank, founded in 1983 by the visionary Nobel Prize winner Muhammad Yunus, stands out as a social enterprise. Boasting about 100,000 borrowers — 100% of whom are women — for microloans averaging $30-40, Grameen Bank has revolutionised both the business of finance and the approach to poverty alleviation. The Grameen Group is now a multi-faceted conglomerate comprising a series of foundations and trusts, as well as for-profit and non-profit ventures united by the same vision: to improve the social and economic conditions of the Bangladeshi population.

In this respect, it is interesting to note that it’s a Bangladeshi establishment, Brac Bank, that received this year’s Asia Money award for best bank for CSR, because of its large array of social activities: education assistance, distribution of warm clothes, healthcare, blood banks and flood relief. A 2016 report on CSR by the Bangladesh Institute of Labour Studies notes that the banking sector has traditionally been at the forefront of CSR in the country, notably because in 2008, Bangladesh Bank issued a directive called “Mainstreaming CSR in banks and financial institutions in Bangladesh.”

Private companies operating in sectors as varied as energy, pharmaceuticals, agri-business, retail and food have CSR activities, usually focused on education and health. The report, however, notes that “there are no mandatory laws or institutionalised principles bringing together the existing social-cultural and moral performance of corporations into the legal framework. Still, this country is striving to establish the concept of CSR among corporations and stakeholders through a legal and organisational basis.” The need for clear rules around CSR was discussed last year during a conference on the subject at the Dhaka Chamber of Commerce and Industry. State Minister of Finance, H.E. M. A. Mannan, announced that the government was drafting national guidelines that will cover workers’ welfare and environmental sustainability.3 As another speaker at the conference, A. S. M. Amanullah, professor of sociology at Dhaka University, observed, “Bangladesh is an emerging market where the focus on CSR has been exponentially rising.”

The ball is also in the court of consumers. From fair trade to responsibly-sourced, they now have a whole range of labels, websites, apps and charities that tell them where and how the products they consume are made. The Good On You ethical shopping app scores brands according to “people, planet and animal” criteria; the Oxfam “company tracker” assesses brands on transparency and workers’ rights; and Baptist World Aid’s Ethical Fashion Guide rates more than 400 brands on their social and labour policies.

Green is the new black