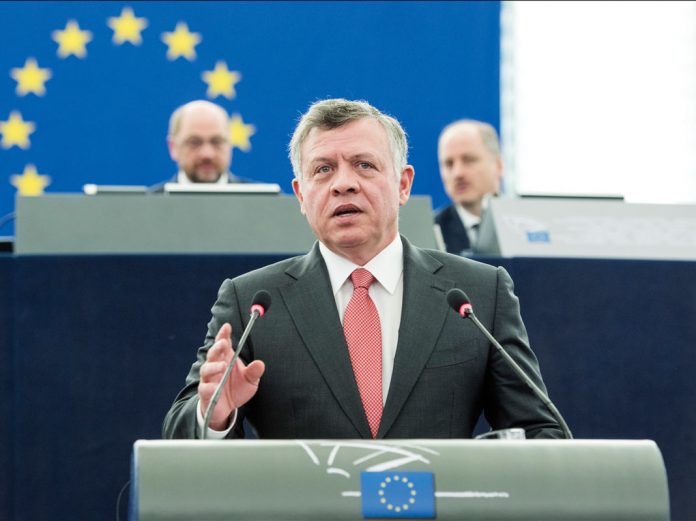 Since ascending the throne in 1999, King Abdullah II has not only maintained his father’s legacy but also pursued a reformist agenda — promoting an open, progressive and tolerant Jordan.

A man of action with a long career in the military and a passion for daredevil sports, King Abdullah II had planned to dedicate his life to the army when his father, King Hussein, named him Crown Prince shortly before he died. Over two decades later, the still youthful monarch has shown that he has a clear vision for the future of his country.

King Abdullah belongs to a dynasty founded in the fifth century by Hashem, the great grandfather of Prophet Muhammad. The Hashemites, who were traditionally the sharifs of the holy city of Mecca and are custodians of Jerusalem’s holy sites, played a decisive role in the Great Arab Revolt against the Ottoman rule in 1916. As Sunni Muslims, they advocate an Islam based on tolerance and social solidarity. “The etymology of the name Hashem reflects the highest degree of generosity and social philanthropy,” says King Abdullah in his official website. “The name Hashem is derived from communal eating ceremonies, where Hashem crushed dry bread and offered it with meat to the hungry.”

Now 56, the King ascended to the throne in February 1999, shortly after his father’s death. King Hussein had carved a unique role for his diminutive kingdom as a peace broker and a loyal Western ally on the regional chessboard; his son set himself the mission to modernise and liberalise his country.

Two decades later, the monarch finds himself in the rather unusual situation of being more reformist than the establishment, while steadfastly advancing his vision step by step. The Arab Spring in 2011 reinforced his conviction that as a country bereft of oil and surrounded by powerful and conflictive neighbours, Jordan will thrive only if its people have a voice and are united, well educated and openly connected to the world. “Sustainable development, economic growth and social welfare lie at the top of King Abdullah’s priorities,” states his website.

“The King has identified several pillars to fulfil this vision, including liberalising and modernising the economy, improving the living standards of all Jordanians, reducing debt, narrowing the budget deficit, joining the global economy, enhancing economic ties with Arab states and other major global markets, as well as combating poverty and unemployment.”

To achieve these aims and build a modern civil state, he has launched a series of plans and programmes.

In 2014 he gave the government the task of preparing a ten-year economic blueprint with the following objectives: “Enhancing financial and monetary policies and ensuring their consistency; improving economic competitiveness; and enhancing values of high productivity and self-reliance to realise sustainable and comprehensive development.” The King emphasised that the success of this blueprint hinges on adopting a participatory and consultative approach to all stakeholders: government, the private sector, civil society organisations and local communities.

More recently, in 2016, he created an independent body, the Economic Policies Council, which is tasked with devising solutions to barriers to economic growth. This 15-member council is under the King’s direct supervision and includes a mix of public and private sector representatives. Its most important work to date is the 2018-2022 Jordan Economic Growth Plan, which was made public at the end of 2017. The objective of the plan is to triple the growth rate to 6.5% in 2021 and reach 7.5% in 2025 via a broad range of reforms and incentives affecting all sectors of the economy.

Another issue dear to King Abdullah is education, which he has always championed as the key to unlocking social and economic growth. One of his recent initiatives is the creation, in 2015, of the National Committee for Human Resources Development.

“Ultimately, we seek  a generation of youth aware of their rights and responsibilities as well as eager to contribute positively towards their country’s economic, social and political development.”

“Our belief that the Jordanian citizen is the centre of our development process remains constant,” he said at the time.2 “Hence, our keenness to invest in our citizens’ education and training to create a generation of forward-looking young people, who are equipped with the skills necessary to analyse, innovate and excel. Ultimately, we seek a generation of youth aware of their rights and responsibilities as well as eager to contribute positively towards their country’s economic, social and political development.”

Education is a domain in which Queen Rania, Jordan’s most dazzling ambassador on the international stage, is also very active. Her Jordan Education Initiative pursues the same goals of promoting new technologies and innovation among the young to foster a new generation of pioneers.

Another important institution works as a link between education and the economy. Established in 2001, the King Abdullah Fund for Development prepares young people for the labour market by fostering their entrepreneurial spirit, their skills and their engagement with the community. It supports start-ups and innovative small businesses, and promotes development programmes in various areas, such as new technologies and tourism.

Testament to the King’s commitment to keeping Jordan on the international stage, the King Abdullah Fund for Development has been a partner of the World Economic Forum on the Middle East and North Africa (WEF-MENA) since 2003, and hosted its 2017 summit at the Dead Sea. It was the ninth time that Jordan hosted a WEF-MENA meeting, reflecting the country’s strategic regional role, resilience and economic potential.

As he prepares to commemorate the 20th anniversary of his reign in 2019, King Abdullah can take pride in preserving his country’s stature as a peaceful state within a conflictive region and in fostering the development of a dynamic, modern and connected economy.