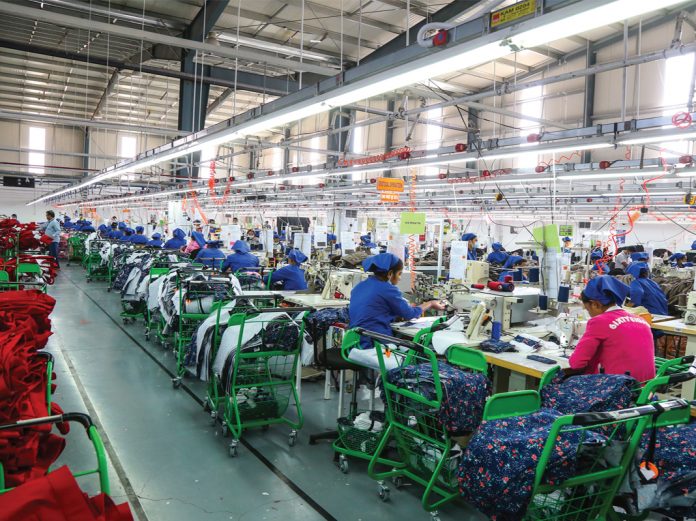 The industrial and manufacturing sector plays a significant role in Jordan’s economy, which the government aims to improve by courting new export markets and enticing foreign investors through incentives and public-private partnerships.

In spite of difficult economic conditions, the industrial sector in Jordan grew by 1.2% between 2016 and 2017 according to figures from the Ministry of Industry, Trade and Supply. But it faces a number of challenges, including a cost of energy that can reach 60% of production for businesses, and the lack of access to finance for micro and small and medium enterprises (MSMEs). Furthermore, the borders with two of Jordan’s main export markets, Iraq and Syria, closed in 2014 because of ongoing conflicts. Finally, the slowdown in Gulf markets has also taken its toll on the kingdom’s exports.

The importance of industry is exhaustively reviewed in the Jordan Economic Growth Plan 2018-2022, with a range of proposals for its development being discussed and implemented. These proposals are based on seven principles: developing homegrown industrial products and services and encouraging creativity and innovation; improving the investment climate; improving the quality of local products and adapting them to international standards; promoting the participation of women in industry; cutting red tape; transitioning from traditionally polyvalent industries to “high value unique and interdependent industries,” or specialised industrial clusters, and preventing unfair practices, including dumping.

Jordan’s industry accounts for 90% of its exports, 25% of its GDP and 18% of the work force, with about 250,000 direct jobs that provide a living to approximately one million people. Jordan Chamber of Industry statistics show it to be a diverse sector with some 18,000 companies in operation and a total registered capital of around $6.2 billion.

It is also diverse in terms of activities, although extractive industries dominate on the back of Jordan’s abundant reserves of phosphate and potash. This sector includes many subsidiaries of the country’s two heavyweights, Arab Potash Company (APC) and Jordan Phosphate Mines Company (JPMC), producing chemicals, pharmaceuticals, plastics and fertilisers mostly destined for export.

Steel is another dynamic industrial sector, with a dozen companies operating in the country, the main one being Jordan Steel Group (JSG), which produces about 360,000 tons of billets, 250,000 tons of steel rebars, 4,000 tons of wire mesh, and 30,000 tons of cut and bend services a year.

Manufacturing and light industry for their part are mainly concentrated in the special industrial zones and estates established throughout the country since the 1990s, where businesses benefit from preferential conditions. The textile and garment industry is among the success stories in this sector. Accounting for about 22% of exports,  it makes Jordan a hub in competition not only with production centres such as Morocco and Tunisia, but also with Asia. Over 70 factories produce clothes for global leading brands like Gap, Victoria’s Secret, Hanes and Macy’s. 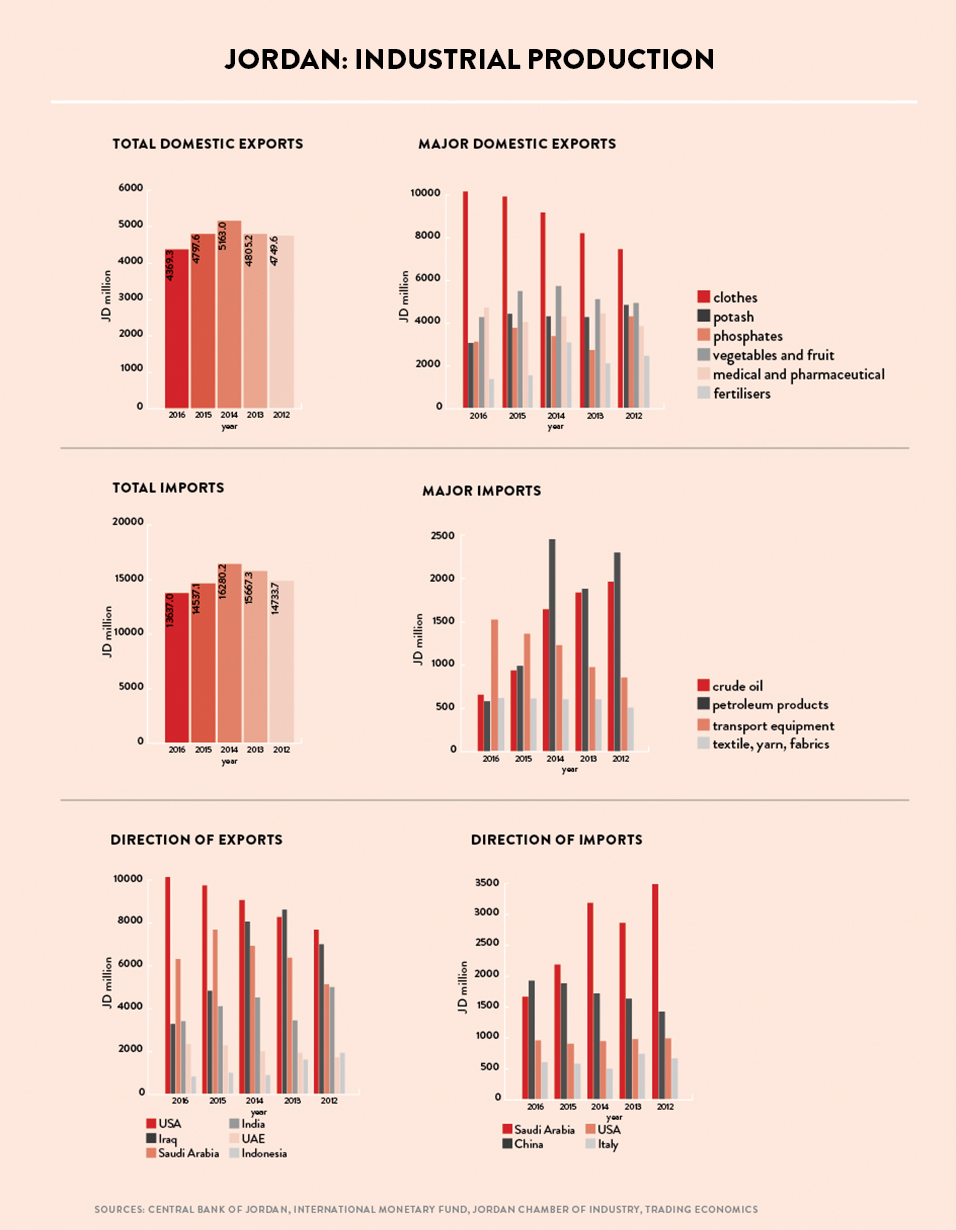 In 1996, Jordan signed an agreement with the US that gives preferential treatment to products coming out of its Qualified Industrial Zones, followed in 2000 by the Jordan-US Free Trade Agreement (FTA), which has been gradually expanded since then. The impact of this FTA has been significant, with total trade between the two countries skyrocketing from $31 million in 1999 to $4.3 billion in 2016.

More recently, in 2016, the EU and Jordan agreed to simplify the rules of origin used by Jordanian exporters to not only facilitate Jordan’s exports to the EU but also to “encourage investment and create jobs both for Jordanians and Syrian refugees.” Total trade in goods between the EU and Jordan amounted to €4.4 billion in 2016, making the EU Jordan’s largest trading partner before the US, Saudi Arabia and China, according to the European Commission.

“The government considers that PPPs are a key ingredient for achieving the development goals set in the Jordan 2025 blueprint.”

An important part of Jordan’s trade transits through the port of Aqaba, on the Red Sea, the country’s only seaport. Strategically located at the crossroads of several continents, Aqaba plays an important role in the diversification of Jordan’s export markets.  A stone’s throw away from Saudi Arabia, Egypt and Israel, the city, which includes a special economic zone, is also the gateway to large markets beyond the region, such as China and India — which are already large buyers of the kingdom’s potash — and to the developing markets of Africa. 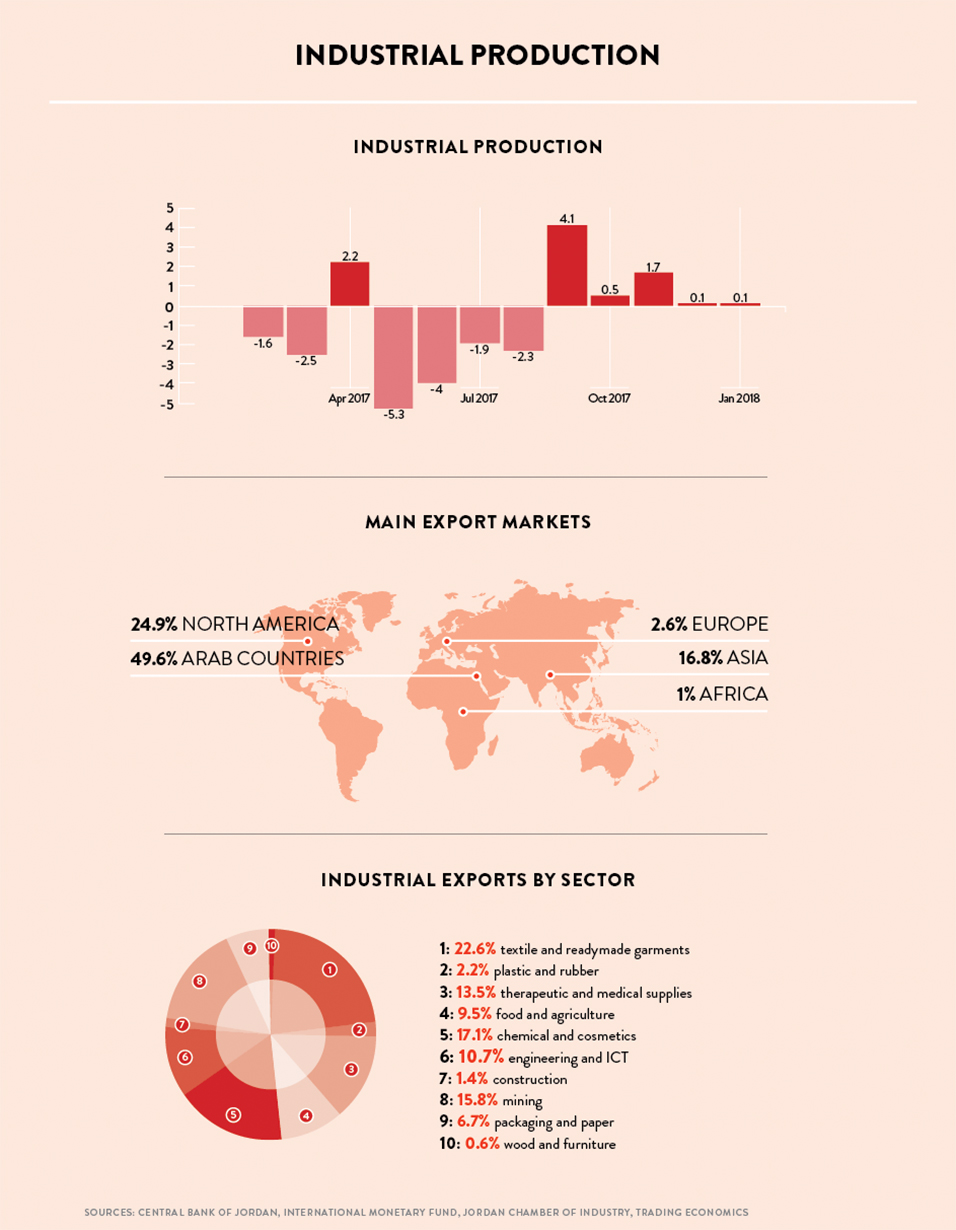 Apart from working to diversify industrial exports and trade partners, Jordan is also seeking to encourage private investment in the sector through public-private partnerships (PPPs). “The government considers that PPPs are a key ingredient for achieving the development goals set in the Jordan 2025 blueprint,” says HE Yarub Qudah, Minister of Industry, Trade and Supply, who cites the 2014 PPP law designed to “encourage private sector participation.” He adds that the most promising sectors for PPPs and private investment are energy, particularly renewables; healthcare, including medical devices; medical tourism; information and communication technologies, and environmental technologies, notably in the water sector.

Concerning SMEs and MSMEs, which represent 98% of all businesses, Mr Qudah says his government is preparing a law that will encapsulate the reforms needed to empower small enterprises, notably through better access to technical and financial support via the Jordan Enterprise Development Corporation and a network of innovation centres. “Given the importance of SMEs for the economy and for jobs, we are committed to investing heavily to promote their growth through targeted subsidisation,” he says.

Jordan is aware of the need to boost and modernise its industry to make it more competitive, but the fact that the sector has consistently grown despite its challenging environment is proof of its capacity to adapt. There is no doubt, however, that the question of how to expand the industrial sector and its exports will remain one of the kingdom’s main concerns.