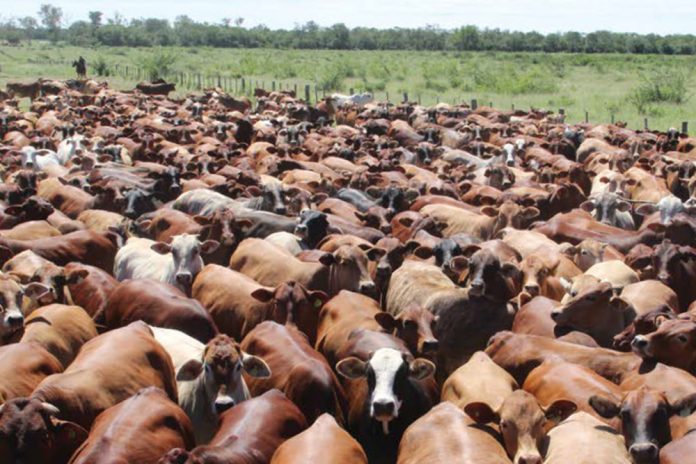 Through the Agricultural Strategic Framework 2014/2018, the Cartes Administration, is promoting the creation of value chains in the agricultural sector

There can be no doubt that the world is getting smaller and smaller. If you ever fly to Moscow on Qatar Airways, you’ll no doubt have the chance to try Paraguayan steak. And if during your stay you choose to eat in a restaurant and have a steak, there is a 25% chance that that steak will also have come from Paraguay. To make this possible, there is a long chain of people and processes dedicated to what we call the agribusiness.
In recent years, Paraguay has emerged as a major player in the field of agriculture, mainly in the meat, oilseed and cereal sectors. This is why it is rightly known as one of the world’s top corn-producers. This country right at the centre of South America produces nine times more food than its 6.7 million inhabitants could consume. It is one of the ten largest exporters of stevia, soya and beef, and now its goal is to create competitive value chains within the agribusiness sector. This will mean that, just like the frozen meat that it exports to Russia or to Qatar Airways, the global consumer can find Paraguayan products in different corners of the globe.
From 2011 to 2015, cattle raising grew by 7.2% making it the fifth biggest growth sector and agriculture grew by 4.9% making it the ninth most important growth sector. The growth strategy considers the territorial characteristics of each region, together with its more vulnerable groups. The agriculture and agribusiness sectors intend to give added value to their strong primary sector. In 2013 agricultural products and their derivatives represented 27% of EAP and 75% of total income from exported goods. Within the primary products sector soya, corn, rice and wheat (in order of importance) represent approximately 38% of the country’s total exports.
Paraguay has seen sustained economic growth since 2002 despite being affected in 2009 by the world fall in commodity prices and in 2012 by a drought which hit soya production hard. The country was able to almost quintuple its GDP by 2014. In 2015, its 3% growth in GDP was above those of Argentina (1.2%), Brazil (-3.8%), Uruguay (1.5%), and Chile (2.1%). As for its exports, these grew from US$3.3 billion in 2009 to US$7.71 billion in 2014.

400 million dollars have been spent on the soya industry in the last four years, simultaneously benefiting other sectors such as transport and trade 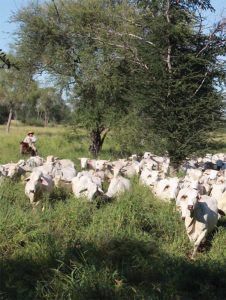 Nevertheless, despite continuing to be the world’s sixth largest beef producer and the fourth largest soya producer, the events of 2009 and 2012 made clear the need to strengthen the agricultural transformation with a state policy promoting value chains. To this end, the Paraguayan Ministry of Agriculture document titled Agricultural Strategic Framework 2014-2018, lays out the six main pillars of Paraguayan agricultural and agribusiness policy. These pillars are reflected in various Ministry of Agriculture programmes. As well as promoting value chains, the programmes seek to provide development support to families with limited resources, food safety to underprivileged areas, and to modernise public sector governance. These projects have been allocated a total of 207.518 million dollars and are sponsored by prestigious International Organizations.
The figures clearly show Paraguay’s commitment to the agribusiness sector; 400 million dollars have been spent on the soya industry in the last four years, simultaneously benefiting other sectors such as transport and trade. Advances in the agroindustry can also be seen in the variety of seeds, between 95 and 97% of which were created using biotechnology.
When we add soybean exports to exports of its two main derivatives (flour and oil), we have approximately 51% of Paraguay’s total exports, which in 2014 amounted to sales of around 3.94 billion dollars. With regard to soybean oil, the main importer was India with 44% followed by Bangladesh with 13%; meanwhile 54% of the soy flour was imported by the European Union and 10% by Peru. It is estimated that for 2017 3.33 million hectares will be sown of which it is anticipated that an ever increasing amount will be done by machine.
As for meat and its derivatives, exports in 2014 reached almost 1.5 billion dollars, provided by a solid workforce comprising 153 thousand farmers within the Paraguay Rural Association. The value chains in this sector have intensified, from the rearing in the pastures and temperate zones, through to a sale made to allow this meat to be savoured on Qatar Airways flights. With a more than 17-fold growth over the last 10 years, Paraguay’s meat and meat derivatives market represents a great opportunity for investors. The production and export of beef and frozen meat represent the sixth-largest market in the world. Paraguayan meat reaches over 40 countries, and Russia alone receives 51% of the frozen meat produced, which represents 25% of their imported beef. Projects like the freezing plant built by JBS in the city of Belén de Concepción are specifically aimed at developing this market.

At present Paraguay only has 59,600 hectares of land surface certified organic, compared to Argentina’s 2.8 million. This means an almost virgin market with opportunities for growth through greater use of technology in the lands of the western region

The organic sector has also been fundamental to agribusiness, more than for its large production for export, due to the competitive opportunity which it represents. Paraguay is one of the largest exporters of organic sugar in the world. The producers are mostly cooperatives which collect and process the product. The Manduvira Cooperative has received support from various international organizations to create the world’s first organic sugar plant. Its successful experience has not only highlighted good practices like Fair Trade, but has provided an example for new producers looking to follow their lead.
Within the Mercosur region, Argentina is the country with the largest amount of land surface certified organic, with 2.8 million hectares. At present Paraguay only has 59,600 hectares and all its organic farms are in the eastern region of the country. This means an almost virgin market with opportunities for growth through greater use of technology in the lands of the western region. With regard to the Institutional Framework, the Paraguayan Government’s National Service for Plant and Seed Quality and Safety (SENAVE), has had an Organic Agriculture Department since 2008, with a law governing both organic areas and the responsibilities of institutional players. While advances have been made in these three sectors (soya, meat and organic), there are other products which, given their high production levels, could also be included within the agribusiness value chains, as in the case of bananas with 32 thousand tonnes produced in 2015, and pineapples with a production of 1,313 tonnes in the same year. Likewise, with 22 thousand tonnes of canola produced, turning a higher percentage of this oilseed into oil is another real option.
Two issues directly linked with the agribusiness sector are the financial sector, where an increase in loan requests has been met by banks and private finance; and climate change, which in 2012 showed the damage it can cause. This is why within the Strategic Institutional Plan there is a recommendation to contribute to the conservation and rehabilitation of natural resources and biodiversity.
Infrastructure growth, the strengthening of governance and institutions, and the low dependence on oil as a motor for its economy present Paraguay with an excellent opportunity to grow its agribusiness sector. Although still at an early stage, there are regulatory and institutional frameworks which seek to provide certainty and direction to state policy. There is also a solid group of private investors and successful groups of cooperatives that have begun to transform primary products in order to face an increasingly demanding and competitive market. Paraguay is planning for the future. Perhaps the next time you have a soy based drink, or order a steak, you’ll think of all the people who enable that dish to reach your table.

1-They come after the following sectors: Finance, general government, transport and construction.
2-Paraguay Economic Outlook and investment opportunities. Central Bank of Paraguay
3-Strategic Agricultural Framework 2014-2018
4-The Observatory of Economic Complexity. www.atlas.media.mit.edu/en/profile/country/pry/
5-With a single fall in the global crisis of 2008-2009, Paraguay’s GDP increased from 6.325 billion in 2002 to 30.881 billion in 2014. This represents a 5-fold growth in the last 13 years. 2013 was the best year with a GDP increase of 14%. (www.data.worldbank.org/country/paraguay)
6-CIA World Factbook Paraguay
7-www.atlas.media.mit.edu/en/profile/country/pry
8-The Strategic Framework recognises the need to make advances in equity, in which agricultural development is carried out through territorial focuses, based on environmental, socio-cultural, economic and institutional features.
9-The Project for Sustainable Rural Development (PRODERS), Project for Inclusion of Family Agriculture in Value Chains (Inclusive Paraguay Project), and Programme for modernising Public Governance of Agricultural Development Support (PAGRO).
10-For more information see the interview with Diego Puentes.  www.mag.gov.py
11-Paraguay Soybeans: Crop Affected by High Summer Temperatures (www.pecad.fas.usda.gov/highlights/2014/03/Paraguay/)
12-Soybean oil US$480M; soybean US$2.3B; soy flour US$1.16B.
13-www.gain.fas.usda.gov/Recent%20GAIN%20Publications/Oilseeds%20and%20Products%20Annual_Buenos%20Aires_Paraguay_4-17-2016.pdf
14-US Foreign Agricultural Service
15-www.atlas.media.mit.edu/es/profile/country/pry/
16-Ibid.
17-Paraguay Rural Association. Introduction to Paraguay and its meat sector, 2015.
18-www.senave.gov.py/registros-de-agricultura-organica.html
19-Organic Paraguay A.C. http://www.paraguayorganico.org.py/agricultura-organica/
20-Law on Promotion and Control of Organic Production of 6 June 2008
21-www.senave.gov.py/docs/informes/ANUARIO%202015.pdf