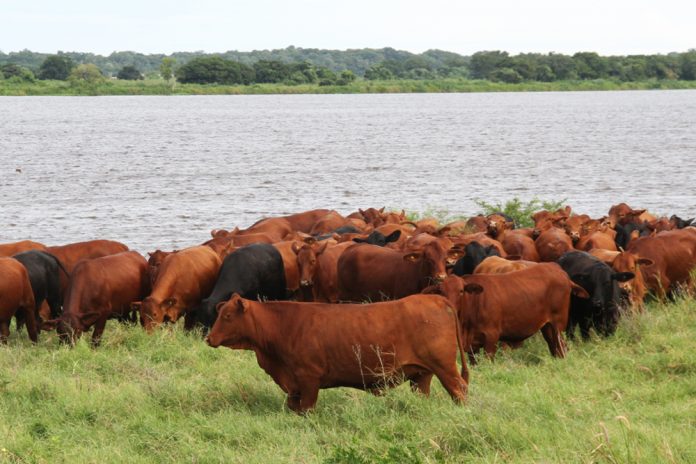 Paraguayan beef is present on kitchen tables around the world, from Moscow to Hong Kong and Tel Aviv

Asked to name a South American country, home to immense cattle ranches and producing high-quality beef for export around the world, most people would probably answer, Argentina. Yet while Argentina has fallen out of the top 10 of the world’s major beef producers in recent years, Paraguay has become a major player, thanks to a combination of clever management, investment from abroad and favourable natural conditions.
“Argentina, the land of the legendary gaucho, has been quietly slipping down the beef export stakes. Once the proud home of the world’s biggest beef eaters, Argentina has now been overtaken by Paraguay,” as has been noted by the Financial Times (*1).
Despite being a landlocked country – with the implications that has for the export trade – and faced with recurring questions about foot and mouth disease, Paraguay has achieved exponential increases in its beef production and exports over the past decade. During the 2007-2014 period, beef exports rose by 80% to 390,000 tonnes. That compares to an increase of 21% in Australia, 8% in Brazil and a staggering 62% decline in Argentina, due in part to drought and to higher prices for soya beans, making the crop more attractive than ranching(*2).
The increase in Paraguay’s exports, combined with higher international beef prices, caused the country’s foreign exchange revenues from beef exports to increase by 14 during the 2007-2014 period, to US$1,726 million, a government report said(*3). The trend continued in 2015 when, according to the US Department of Agriculture, Paraguay’s beef sales abroad stood at 381,000 tonnes, making it the world’s eighth-largest exporter. By April of this year, Paraguay’s exports had already matched that figure and the USDA forecasts they will reach a record 410,000 tonnes by October (*4).
Although it may not be well known in Europe or the United Kingdom as a source of top-quality beef, Paraguay has carved out an export market around the world. Some 48% of its beef exports go to Russia, 16% to Chile, 12% to nearby Brazil, 8% to Hong Kong, 5% to Israel and the remaining 11% to other countries(*5).
Beef, along with soya beans, has long been Paraguay’s leading export, making agriculture a mainstay of the economy. With a population of only seven million to feed, Paraguay’s ranchers are permanently focused on the export market, which consumes over 20% of the country’s beef production(*6). But how has Paraguay managed to surpass traditional, iconic beef exporters such as Argentina? One reason is that its geography, rainfall and weather conditions are all naturally suited to cattle production. This favourable ecosystem has contributed to a 44% increase in cattle herds between 2007 and 2014. Herd numbers are now expected to reach 20 million by 2020, up from the current 16 million (*7).
Another factor is the government policy regarding cattle production and agriculture in general. “Unlike Argentina, the Paraguayan government supports a very free-market approach to agriculture which benefits beef exports,” wrote Erin Borror, an economist with the United States Meat Export Federation, following a 2014 visit to Paraguay (*8). “Beef exports are viewed as a valuable economic engine for the country, rather than a competitor that drives up costs for domestic consumers.”
She observed that Paraguay was well positioned for continued growth, despite some natural obstacles (among them its landlocked border) that make transportation of beef and other exports more complicated and expensive. As an example, the cost of shipping beef by truck from Paraguay or Chile is almost as high as the cost of ocean freight to Russia. Paraguay’s cattle ranching business has also benefitted from foreign expertise. Among the main investors in the industry are Brazilians, who are helping to bring the latest livestock-raising and production practices into play.

As cattle herds continue to grow and exports to soar, Paraguayan government officials are projecting that foreign exchange revenues from beef will reach US$4,000 million
($4 billion) by 2020 and will create 10,000 jobs

Paraguay’s rise to the top ranks of the world’s beef producers has not always been easy. The discovery of foot and mouth disease in some cattle in 2002 and 2003 caused a number of countries to ban imports from Paraguay. However, the country has responded with vigorous vaccination campaigns and has been able to renew its certifications with major international authorities such as the World Organisation for Animal Health.
In 2011 Chile suspended imports of Paraguayan beef, as did the European Union, due to another outbreak of foot and mouth disease. Access to the Chilean market was reinstated in 2012, and exports to Europe are expected to take off following the European Commission ruling, in April 2015, that Paraguay’s beef exports offer satisfactory guarantees, regarding the disease.
As cattle herds continue to grow and exports to soar, Paraguayan government officials are projecting that foreign exchange revenues from beef will reach US$4 billion by 2020 and will create 10,000 jobs(*9). However, although they have managed to create and maintain a worldwide market for the country’s beef, Paraguayan officials are not resting on their laurels. This year they have made presentations of Paraguayan beef in a number of countries, including Qatar, the United Arab Emirates and Germany, where 300 guests at the Paraguayan embassy in Berlin were treated to a feast of over 300 kilograms of high-quality beef. In April, Paraguay obtained permission to export its beef to Egypt, opening yet another new market.