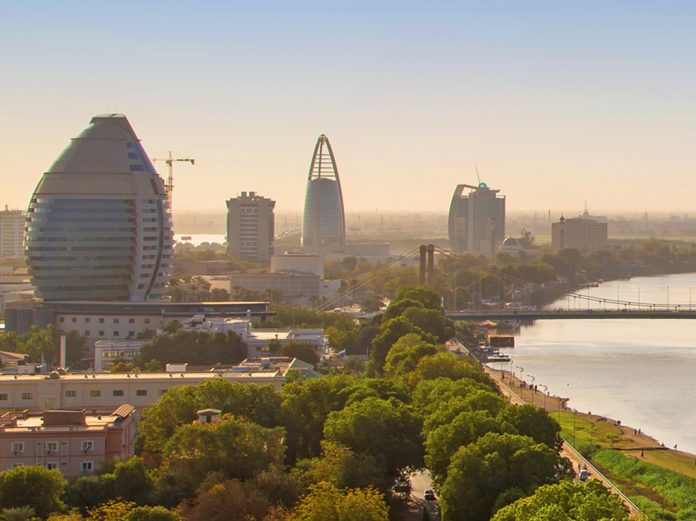 Sudan has undeniably suffered some seismic shocks to its economy in the past decade: namely the global financial crisis and the succession of South Sudan in 2011, which led to Sudan losing more than 80% of its oil fields. But the country has stood up, brushed itself off and has taken important steps to diversify its economy and fund sources in order to bolster its income through other sectors.

Industry and services have been expanding at an accelerated pace. As discussed, Sudan is rich with mineral resources such as gold, silver, iron, zinc, copper, chrome, uranium, gypsum, mica and other building materials. The country has favourable conditions for agriculture, a varied climate, fertile soil and water resources, and it has a wealth of uncultivated and arable land. The country’s major exporting partners are the UAE, Saudi Arabia and Egypt. Sudan is a member of the biggest free trading area on the continent, the Common Market for Eastern and Southern Africa (COMESA), which promotes increased cooperation in fields such as trade, customs and monetary affairs, industry and energy, and natural resources. The country is also a member of the Intergovernmental Authority of Development (IGAD) in Eastern Africa, which assists economic cooperation and integration.

Sudan has a banking system that is over 100 years old,  and has banking services across the country. The majority of financial institutions follow Islamic banking principles

In both 2014 and 2015 GDP growth was around 3.5% and it is projected to jump to an estimated 4% in 2016, demonstrating the country’s increasing economic stability. The largest sectors in GDP contributions are the service, agriculture and industry sectors. In order to absorb the shock of losing a high percentage of their oil reserves due to the succession of the south, the Sudanese government has been engaging in strategic partnerships with local and foreign private investors to increase agricultural exports.
There have been a series of economic reform measures implemented in Sudan in the past decade. Results from their first Five Year Plan (2007-2011) show that the country invested significantly in infrastructure development, with key areas being transport, water supply and sanitation, electric power and communication networks. However, there remains a funding gap for this development, which requires long-term funding by commercial banks, the private sector and public-private partnerships.

In 2014 the Sudanese President Omar al-Bashir announced plans for political, economic and social reform. National development plans, and legislation and regulations have been reviewed with the aim of diversifying the economy and attracting Foreign Direct Investment for new industries. Recent economic reforms aim to strengthen the financial system and improve the performance of the banking sector through the introduction of new financial policies, the creation of a better business environment, building a more efficient financial market, and promoting economic growth. There are also plans to mobilise public-private partnerships in line with government development visions; to dedicate greater attention to infrastructure development, agriculture and livestock investments; and to expand micro-financing possibilities.

The new Five Year Plan 2015-2019 aims to diversify the economy away from oil to agriculture and other sectors. In 2014 the government also agreed to an informal agreement with the International Monetary Fund Staff-Monitored Programme, with the aim of receiving assistance in the implementation of economic and financial policies and the achievement of a set of objectives. These include sustaining economic growth, controlling inflation, reforming the banking sector and reducing the budget deficit.

Current top investors in Sudan include China, Malaysia and India in the petroleum sector. Arab countries are the key investors in sectors such as agriculture, industry and service

There are a number of market players expanding in Sudan, including banks, insurance companies and microfinance institutions. These are governed under the Central Bank of Sudan and the Insurance Supervisory Authority. Sudan has a banking system that is over 100 years old, and has banking services across the country. The majority of financial institutions follow Islamic banking principles. Alongside the Central Bank of Sudan, there are 34 banks that operate in the country. Although the total assets of operating banks have increased by 19% from 2013 to 2014, financial institutions remain concentrated predominantly in and around Sudan’s capital, Khartoum. However, in 2014 a national initiative between banking and telecommunication sectors led to mobile financial services being launched, which has facilitated greater access to finance and financial services. The government has also supported microfinance programmes as a way of increasing access to finance for those with limited access to financial services. On the whole, Sudan continues to have a high under-banked population, which presents opportunities for the banking system to expand.
The Bank of Khartoum (BOK) is Sudan’s biggest and oldest bank, established in 1913. It has over 70 branches and 150 ATMs around the country and is often the bank of choice for consumers, businesses, multinationals, the UN and NGOs. Its global correspondent banking partnership network is made up of international and regional banks from Europe, the Middle East and Asia. It established its first overseas branch in Bahrain in 2015.  BOK has received a number of regional awards including the Most Innovative Finance Bank in East Africa (2014, International Finance Magazine); Best Microfinance Bank (2014, Banker Africa); and the Best Retail Bank in East Africa (2014, Banker Africa Awards).

Sudan has been compliant with the Sharia financial system since 1989. Arab investments in the Sudanese financial sector have led to fast expansion and greater trade and investment in the country in areas such as agriculture, infrastructure, services and energy. There are 15 owned Arab banks based in Sudan which have facilitated greater trade and investment in the country and provided increased financial access for the Sudanese people. Investors are from Saudi Arabia, the United Arab Emirates, Kuwait, Qatar, Jordan, Lebanon and Egypt. These banks help to facilitate investment across the whole of the Sudanese industry. For example, the Saudi Sudanese Bank, which is 22% Saudi, provides correspondence, foreign trade, investment and other commercial banking services. Byblos Bank Africa is another example of an Arab bank that has specialised in facilitating foreign investment and trade. In 2013 the Faisal Islamic Bank of Sudan won one of the Global Finance Magazine awards for World’s Best Financial Institution, for its percentage growth in assets, deposits and income, and its return on equity. The Al Baraka Bank, an international banking group with operations in Sudan, was a global winner for the 2012 World’s Best Bank award.

Increasing access to microfinance has also become a key area for development in Sudan. The Central Bank of Sudan established a microfinance unit in 2007, which since then has required all commercial banks operating in the country to establish microfinance offices and allocate 12% of total loans to microfinance lending operations. Arab banks also contribute to increasing access to finance in Sudan. In 2014 microfinance reached 4.6% of the total banking financing. There is scope for Sudan to pursue global microfinance providers that wish to establish themselves in the country or throughout the region. Another area for development is increasing access for small and medium-sized enterprises (SMEs) to financing. Improving the SME sector would contribute to poverty reduction, job creation and macroeconomic stability. The Sudan Trade Point facilitation centre collects information related to national and international trade to serve traders, businessmen and foreign investors. It also aims to improve Sudanese foreign trade in international markets, with a specific emphasis on SMEs.

The insurance sector in Sudan is made up of 15 companies and is governed by the Central Bank of Sudan and the Insurance Supervisory Authority (ISA). Islamic insurance was first introduced by the Faisal Islamic Bank in 1978 through the establishment of the Islamic Insurance Company. Since then several other banks have followed suit. In 1992, the Minister of Finance declared that all insurance companies should ensure their operations were in compliance with the Sharia financial system.

Sudan began to attract important amounts of Foreign Direct Investment after 2005. According to the Investment Policy Review (IPR, by UNCTAD), the country has a relatively open investment legislative framework in place and several laws are modern and in line with good practice. Some progress is still needed in secondary legislation, institutional capacity, and coordination among government departments. Although sanctions and high inflationary levels have made the business environment relatively weak in some aspects, the county has made progress in lifting personal communication sanctions and opening the market to external communication and technologies. The country continues to work towards the gradual lifting of more sanction areas, and hopes this will allow for increased inflows of foreign investment. Current top investors in Sudan include China, Malaysia and India in the petroleum sector. Arab countries are the key investors in sectors such as agriculture, industry and service.

Sudan’s geographic location makes it a bridge between different African regions, specifically North Africa, East Africa, Central Africa and the Horn of Africa, whilst it also links Sub-Saharan Africa to the Middle East, and to Gulf countries. Four neighbouring countries, Ethiopia, South Sudan, the Central African Republic and Chad, are landlocked and therefore partly depend on Sudan’s seaports for their exports and imports.

The Sudanese welcome foreign investors to Sudan. The country’s wealth of resources offers a wide range of investment opportunities. Sudan has been dedicated to increasing opportunities for investment in the country. The government established the Ministry of Investment in 2002, which formulates strategies, policies and programmes aimed specifically at developing local and foreign investments in Sudan.

Following the signing of the Comprehensive Peace Agreement (PCA) in 2005 between the Sudan People’s Liberation Movement and the Government of Sudan, there has been increased interest in foreign investment in the country. The Ministry of Investment works to facilitate procedures and regulate rules and procedures, in order to protect investors’ rights and create a suitable environment for increased investment in the various sectors of the country. In order to encourage foreign investment, the state is moving towards an open economy and privatisation in all fields, so as to activate and encourage participation of the private sector in the socio-economic development of the country.