Maquila denotes the assembly of goods intended for exporting using imported parts. Policies focussed on the industry are officially promoted in Paraguay, with the objective of increasing industrial development, exports and creating new jobs

In 1997, Law 1064 “On the Maquila Export Industry” came into effect, covered by Decree 9585 of 2000, representing a new opportunity for foreign and local investors. The National Council of Maquila Industries (NCMI) is responsible for officially promoting maquila policies in the country, led by the Ministry for Industry and Trade, comprising State Institutions including the Treasury Department, the Ministry for Foreign Affairs, the Central Bank of Paraguay and the Technical Secretariat for Planning.
Through the Maquila system, goods are produced and services are provided for the international market. The basic objectives are industrial development, creating jobs and increasing exports.
This production of products and services is provided by companies legally established in the Paraguayan territory. In this way goods and services from abroad, temporarily imported, are combined with a national workforce and other national resources with the resulting products destined for the export market.
CNIME, as the body responsible for promoting the system, works tirelessly to produce adequate regulations and operational conditions for development. Likewise, this project has been created with the aim of supporting the national economy, enabling products produced in Paraguay to be successfully sold abroad.
The main beneficiaries are those national and foreign companies located in Paraguay, although they might be protected by another located abroad, be it a natural or legal person. The law does not impose limits on the capital and this may be foreign, local or mixed and the maquila industries can be located in any part of Paraguay, provided local regulations are followed. Likewise, the companies may be individuals or legal entities and there are no restrictions with regard to the area of production.

Through the maquila system, goods are produced and services are provided for the international market. The basic objectives are industrial development, creating jobs and increasing exports 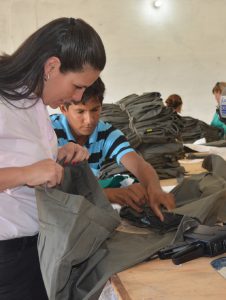 Workers are protected by the current laws and the relationship between these and employers are regulated by Law 213/93. This creates a dynamic which leads to new niche markets and creates employment opportunities, mostly for Paraguayan citizens. The industrial activity is carried out by virtue of the contract drawn up between the maquila company registered in the national territory, and the other company resident abroad, which is the parent company. This creates a link between investment, product and service, impacting positively on the national economy. The Paraguayan Maquila is in a phase of expansion, working with both the public and private sectors, through the aforementioned CNIME, the Chamber of Paraguayan Maquilas (CEMAP) and other interested collectives.
How does the maquila work? A contract is drawn up between a foreign parent company and a maquila for industrial processes or services whose product is intended for exporting. The maquila may then subcontract another company which would then become the sub-maquila. The contract between the maquila and the sub-maquila is liable for a single tax of 1% VAT in the national territory.
The profits for companies that only act as maquilas are exempt from Patent, Trade, Industry or Professional Tax. The same holds for the Construction Tax that affects the industrial or service plant. This also applies to fees directly related to the maquila process, the VAT levied on the renting or leasing of the machines and systems that form part of the maquila programme, as well as any other tax, fee or national contribution or department created or to be created. Any person, natural or legal, national or foreign domiciled in the country and authorised to carry out business activities may benefit from this Law.
As for environmental questions, the maquila projects are subject to the relevant laws, regulations and bylaws. This is to protect the national territory and its resources and provide environmental safety.
It is worth noting that maquila industries represent an influential sector within the manufacturing industry, showing significant growth since their creation in 2001, with 108 maquila companies created. Between 2013 and 2016, 66 projects were approved with a total investment of US$142,949,510 in the Alto Paraná, Central, Amambay, Capital, Guaira, Canindeyú and Presidente Hayes areas; helping to create 5,683 jobs. This has led to an increase in exports, estimated at US$284,000,000 which represents a 14% growth compared to 2014. On average these exports have grown by 21% in the 2008-2015 period7.
It is worth looking at some of the main investors who have opted for the maquila system, achieving excellent results thus far. Grupo Harrison is one of the investors that have opted for this system in Paraguay, with its companies primarily focused on health, through pharmaceutical industries and distributors with pay as you go insurance, as well as the mobile phone sector.
Another example is Laboratorios LASCA, founded by Oscar Vicente Scavone, which has formed the country’s largest pharmaceutical group with over 500 professionals dedicated to research and creating quality medicines that are also exported for the international market.
The maquila system means not only an opportunity for national and foreign entrepreneurs but also for developing the internal workforce, with the objective of increasing the number of decent, stable and decently paying jobs.

A meat industry with the stamp of quality