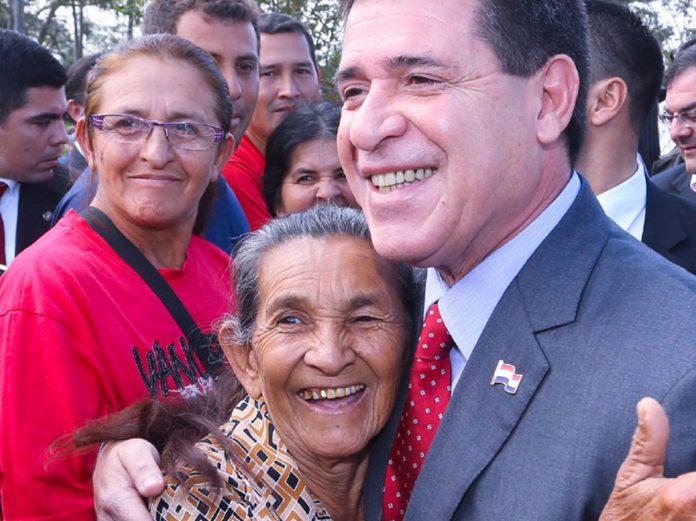 In 2013, Horacio Cartes was elected as Paraguay’s new President. Three years later, the results speak for themselves. He talks to Leading Edge about principles, policies and priorities

Leading Edge (LE): You are half-way through your presidential term. What’s left on the agenda and what is your imminent priority?

Horacio Cartes (HC): We have achieved a great deal, but the first thing that comes to mind is the transparency we have created in public services. Our government worked hard during its first years to create tools and to establish transparent systems in every state institution, including the bi-nationals. Laws were passed and programmes were created so that the public in general could have access to information about what the state is managing, including budgets, salaries, projects and contracts. These tools are paramount in order to do away with corruption in the current government and in future administrations. When there is transparency in government, its programmes are more efficient and the people receive more and better benefits. Thanks to transparency in our administration, we have ensured that billions are saved for the state and we have strengthened our social programmes to reduce poverty, which is one of the main priorities of our government. Through efficiency and responsibility we can offer more training, decent housing, basic services, opportunities and better living standards for the Paraguayan people.
Another substantial achievement is the major investment made by the government to improve the infrastructure of our country, investing in public work to build pathways, roads, bridges, and so on. But this is something that we also have on our agenda for the near future, because our country has a great deal of requirements to fulfil. We will continue in our intensive task to increase and improve these public projects, not only though governmental investment, but also through associations with other sectors. And we are already working on major projects that will soon be implemented, and that will galvanise our economy considerably.

LE: LE: Among the core ideas of the Cartes Administration, how would you describe Paraguay as a brand projected to today’s world?

HC: HC: Paraguay is the heart of Latin America, and it has a key role in helping the world rediscover the potential of Latin America and the Caribbean, in completing the transformations that our country and the region require, and in improving the living standards of its people. From the first day, I underlined the importance of improving relations between Paraguay and the rest of the world in order to embark on inclusive economic development. We have worked hard to encourage and guarantee foreign and national investments, and we have made great progress in public safety and legal security.
Thanks to our efforts, the world sees Paraguay as a country of opportunities that offers reliability and predictability. Our country stands out in the region as an attractive base from which to do business, invest and take on new economic business ventures. Paraguay is currently a jewel being discovered and gradually making a great impression on the world.

LE: What progress has been made in eradicating extreme poverty?

HC: Reducing poverty is one of our main goals, and one of our great challenges, which is why we are fighting it on all fronts. We are developing comprehensive projects to connect our social protection programmes with our economic inclusion programmes, to create more profound social transformations that will encourage development.
We work together at ground level, with dedicated targeting systems to benefit those who are in most need, with full support for families, so that the most vulnerable people have access to education, health, adequate accommodation and sanitation systems. In this way we intend to provide better living standards for Paraguayan families.
We are also reforming public services sector, to offer improved and more efficient social services, run under public-private co-production schemes. We have created programmes such as the Spreading Opportunities Programme, a strategic plan to eradicate poverty that brings together dozens of public institutions, and invites the private sector and civil society to unite their efforts. The economic projections of the country are optimistic, which is why we are confident that higher economic indices will bring reduced levels of poverty in the country.

The ambitious transparency programme that was put in motion in our country follows the principle of making the public public, which we promised and have fulfilled from the first day of my government

LE: Can you talk a little about your transparency policies?

HC: In order to build up the country we want, it is of the utmost importance to work towards ending the corruption that for decades caused so much harm to our country. The ambitious transparency programme that was put in motion in our country follows the principle of making the public public, which we promised and which we have fulfilled from the first day of my government. The policy allows citizens to fully enjoy their right to access public information. This transparency process also covers the absolute freedom of the press and active public participation to monitor public interests, and their implementation has improved the position of Paraguay in the 2015 corruption perceptions index.

LE: What are your thoughts on Paraguay’s place in the Mercosur?

HC: The Southern Common Market has made significant improvements in 25 years, despite the deficit that some could claim, and still stands as a catalyst for economic growth and trade relations, and as a strong promoter of integration. As Paraguayans we are integrationists, and when Mercosur was created we had already gone a long way in that direction. We have gained recognition from other members for the benefits of our geographical location and the volume of our economy. Since colonial times, we have had a rich history of commercial, cultural and social exchange with Argentina. We share not only a long border but also the wish to maintain our strong unification.

LE: What impact has the bilateral agreement with the European Union had on trade and cooperation?

HC: The commercial and cooperation agreement between Mercosur and the European Union will become the most impressive association between two economic blocks, and will have a direct impact on the global economy. We are strongly motivated by several factors to make the agreement a reality as soon as possible. We have recently been participating in the Organisation of Economic Co-operation and Development meetings in Paris, where we have had the opportunity to meet different European leaders. Our relations with the organisation, alongside other processes that we have been putting in place will allow us to consolidate, extend and accelerate change so that the Paraguayan people can have better lives.

Our meetings with the OECD in Paris will allow us to consolidate, extend and accelerate change so that the Paraguayan people can have better lives

LE: What achievements have been made so far in public-private partnerships?

HC: As soon as we began government, we set out the advantages of a law of public and private association
for developing the country. With this legislation now in force, we are able to attract the attention of foreign investors who see Paraguay as an ideal business setting, backed by the legal endorsement. And we are already initiating major projects that will provide the development our country needs.

LE: What are the competitive advantages of Paraguay as a business and investment destination?

HC: Over the last decade Paraguay has enjoyed continued economic growth, at an average of 5% per year. We have a well-ordered monetary policy, with low inflation and a stable currency. Paraguay also has a solid financial system, a pro-investment taxation system, a balanced government budget and a sustainable public debt. Paraguay offers one of the highest returns on direct foreign investment in the region and free movement of capital. The permanent presence of foreign companies in Paraguay is indeed a consequence of the legal security, the advantages of a competitive and specialised workforce, the connectivity, and a favourable disposition of the Government. And on top of that, we also offer the characteristic Paraguayan welcome.
We have been able to achieve the results we expected through our focus on values such as transparency, efficiency, responsibility and compromise: values that I consider to be essential in every political, and general, field. Thanks not only to individuals but also institutions working together, our progress has been more efficient and has provided greater benefits to the people.

Paraguay: a shift in the development paradigm