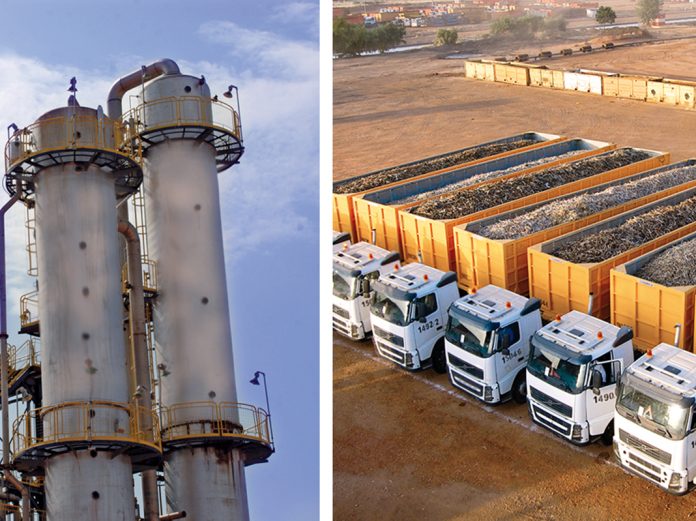 Sudan is at a crossroads in industrial development. It engages in some light industries in the north of Khartoum including the assembly of small cars and trucks. There is also some manufacturing of soaps, detergents, shoes and dry batteries. Meanwhile, the government is making a concerted effort to push its agro-processing industry given that agriculture is already the main player in the country, yet under-exploited, and that agro-industry depends on agriculture for its raw materials. The two are therefore closely aligned.

The Ministry of Industry says, “Industry has become the real hope and driver for the development of Sudan. It represents the cornerstone for the economic and social development considering the role that it can play in strengthening and multiplying the capabilities and potentials of the national economy.”
The government’s twenty-five year strategy (2007–2031), which details a long-term vision for sustainable development, recognises the need to diversify the economy “by supporting manufacturing, agriculture and the processing of agricultural goods as well as developing services, notably the tourism industry” (UNCTAD Investment Policy Review on Sudan). The second of two five-year plans covers the period 2012–2016 and calls for improvements in the regulatory regime not only in investment but also in support of private sector development. The country has also adopted a three-year economic salvation programme (“salvation” pertaining to overcoming the economic consequences of the secession of South Sudan in 2011), part of which entails the development of productive capacities in non-oil industries.

One such industry is the agro-industry which comprises economic activities relating to the manufacturing sectors primarily engaged in the processing of raw materials, as well as intermediate agricultural, fish and forestry products (UNIDO). Sudan’s agro-industry is currently dominated by sugar, with some flour mills. The country is one of one of the biggest African sugar producers after Egypt and South Africa, and aims to be competing with world leaders like Brazil and Turkey by 2020. Kenana is the main sugar manufacturer in Sudan.
In terms of wheat flour, 2016 production sat at 1,694,000 tonnes, up 16.8% from 2012 (World Grain). In January 2016, the biggest flour mill to date was opened in the country: Gena Flour Mills in North Khartoum. Constructed by the Turkish Ugur company and owned by the government, it enjoys a productive capacity of 1,800 tonnes per day. It includes nine silos with a total storage capacity of 63,000 tonnes.

The Ministry of Industry is looking for investors, first and foremost, in agro-processing. Already in 2016 there has been considerable interest from outside investment groups looking to invest in this domain. Many have dispatched experts to study Sudan’s soil and carry out feasibility studies in different states with a view to cherry-picking their preferred terrain.
It makes sense for the agro-industry to be a main focus of Sudan’s industrial development, as it is agriculture that drives GDP growth in the country (contributing some 29% to GDP between 2011 and 2015, according to the World Bank). Generally, worldwide, fast growth in agriculture contributes to a rapid rise in agro-processing, which in turn provides new engines of growth as well as an opportunity to substitute imports (UNIDO). Agro-industrial development in Sudan would, hypothetically, witness raw materials such as cotton, oil and fruits being used to produce textiles, soap and canned fruit, respectively. It would be the natural progression for such an agro-rich nation.

Sudan’s agro-industry is, excitingly, almost being rediscovered after oil production and exports took centre-stage between October 2000 and the secession of the South in 2011. That said, it is noteworthy that even during the years when Sudan’s oil exports were at their highest, petroleum’s contribution to GDP never matched that of agriculture. Turning attention back to agricultural production hasn’t come without its challenges. Frustratingly, lack of capital, erratic power supply, high taxation and lack of spare parts, have variously restricted genuine efforts to expand agro-processing businesses in Sudan.
However, areas of agro-industry that are currently under expansion include meat processing, as well the leather and textile industries. Livestock has consistently been the biggest contributor to the agricultural sector. There are some more niche areas of agro-industry which were once burgeoning in the country, but which subsequently suffered for many reasons, and which today offer great potential to be revitalised. A report by UNEP suggests that one such sector is groundnuts.

Most agro-processing of groundnuts involves milling for groundnut oil and producing groundnut cake as a by-product. Large-scale groundnut oil processing was previously very important in Darfur. Nyala, Darfur’s largest town and major commercial centre, has long been the centre for the agro-processing of cash crops in Darfur. Today, it is small-scale mills that dominate there, partly to meet growing demand in urban areas. The groundnut agro-processing sector has thus shifted from trading outside Darfur to meeting local consumption needs in urban areas. One major trading company based in Khartoum has already caught on and has recently invested in the groundnut trade in Darfur, seeing the potential and the opportunity for development by applying more modern technology to agro-processing.

Indeed, given Sudan’s never-ending stretches of fertile land, also ripe for growing peanuts, sesame and sunflower, there is much potential for the establishment of a strong cooking-oil industry. There is currently activity in this area, but agricultural productivity needs to be better addressed so that annual production of these seeds is a closer match to the quantity available for export, which is currently much lower.

An increase in agro-processed products would also have the happy effect of expanding Sudan’s export capacity. Other African nations, such as Ethiopia, have followed this trajectory. Sudan has the longest coastline on the Red Sea through which some 70% of international trade passes. Sudan is a magnet in the waiting game for large-scale investments with mostly export-oriented activities. A report by UNCTAD suggests that investors from the Arab League and COMESA might reap the greatest benefits from engaging in Sudan’s agro-industry, given the geographical proximity and the existing trade agreements. In addition, technical revolution in Sudan’s agricultural sector could be greatly supported by European investors.

Outside agro-industry, the industrial sector in Sudan is composed of the following sub-sectors: food, spinning and textiles, leather, chemicals, pharmaceuticals, oil and soap, engineering, building materials and refractories, and printing and packing. One of the major players is GIAD group which manufactures cars, trucks, buses, trailers, semi-trailers, fire trucks, ambulances, mobile veterinary clinics and mobile workshops.

If the country could build its capacity for processing mineral resources, the industrial gains could be substantial. Quite some mystique surrounds Sudan’s mineral resources in terms of how much is still waiting to be discovered. However, some degree of the following have been detected: gold, iron, copper, manganese, silicon, limestone, marble, gypsum, talc and natural gas. Small quantities of asbestos, chromium and mica are already exploited commercially.
Adding value to natural resources to create more job opportunities and investing in agro-processing industries are key strategies for Sudan to deploy in order to shoulder the economy during this time of transition. With its wealth of natural resources and agricultural prowess already in situ, the country has a headstart in the race among developing countries deploying a similar strategy.